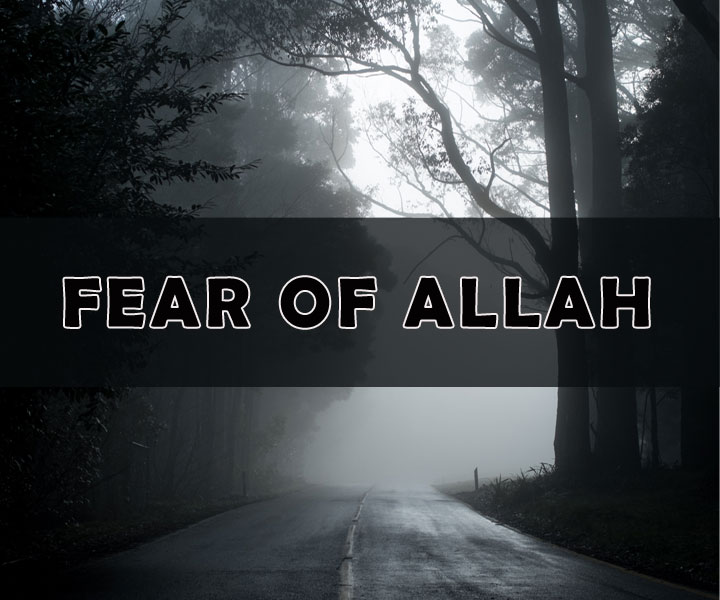 In Quran the word which is used to describe Muslims is Al-Muttaqin and it means the person who practices taqwa. Taqwa is an Arabic word for being aware and conscious of Allah, of reality and religiosity, the one who never forget about Allah’s commands, always have fear of Allah. Al-Muttaqin have a strong belief on the oneness of God, they never consider anyone or anything equal to Allah or superior than Allah. What does then mean fear of Allah? Our hearts are brimming with the love of God; we are forever ready even to sacrifice our lives in the name of Allah.

“O mankind, fear from your Lord, who created you from one soul and created from it its mate and dispersed from both of them many men and women. And fear Allah, through whom you ask one another, and the wombs. Indeed Allah is ever, over you, an Observer.” [3:1]

Allah also says in another verse of Surah Az-Zumar:

Say: “O Allah, the One who knows the unseen and the visible (’alim al-ghayb wa al-shahada)! You will judge between your servants about what they dispute about.” [39.46]

From above verses we can get our answer of the question that what is the fear of Allah and why we fear from Allah; the most merciful and the one who loves kindness. As Allah is the Creator of this universe, and so only He knows what ever happens in the world and what has happened since from the first day and what will happen till last day. Not anybody is adept to hide their good or bad deeds from Allah. We should feel fear while doing such actions which Allah has forbidden us to do like disobey Allah’s commands, being cruel with others, dishonesty etc. Allah is observing us throughout our life span. Fear is associated with punishment given by Allah for atrocious behavior which is opposite to Allah’s direction. We should adopt qualities of Al-Muttaqin to avoid punishment and fear of Allah. What are the qualities that every Muslim must have?

Believing in the Unseen

Muslims have a strong belief in the oneness of Allah and in Hazrat Mohammad (PBUH) that he is the last messenger of Allah, in all His messengers and books, and in the life hereafter. In spite of this that no one in this world knows enough or even sees Allah and His revelations, there are signs for those who acknowledge and not closed their eyes from reality. Without belief it is not feasible to follow Allah’s direction.

Allah guides us in Quran in surah Al-Baqarah, verse 3-4:

“The pious are those who believe as a matter of faith (bil-ghayb), perform prayer, and spend of what We have provided them. And who believe in what is revealed to you and what was revealed before you, and who are certain about the hereafter.” [2:3-4]

It is not enough to just have a belief in Allah, His books, messengers, rather we must have to practice what Allah has guided, spend our entire life according to Allah. We should perform prayers five times in a day with punctuality and should fast in the month of Ramadan. We should make a habit of Quran recitation routinely, and give zakat to needy people. If we are punctual and sincere with our prayers it does not give any benefit to Allah, their ultimate result is our own better life without any worries neither in this world nor hereafter. Allah has reminded us for prayers so many times in Quran and also mentioned the importance of prayers, He says:

“You shall observe the Contact Prayers (Salat) and give the obligatory charity (Zakat), and bow down with those who bow down. “ [2:43]

"Observe the Salat (Contact Prayers) for it prohibits evil and vice." [29:45]

“Surely, those who recite the book of God, observe the Contact Prayers and are charitable both discreetly and openly can hope for an investment that never loses. He will recompense them generously and will multiply His blessings upon them. He is Forgiving, Appreciative." [35:29-30]

“Successful indeed are the believers; who are reverent during their Salat (Contact Prayers)." [23:2]

Spend life According to Allah’s Will

Allah has revealed the Holy Quran for us not only for recitation but also for understanding. Without interpretation of Quranic verses how we can spend our life according to Allah’s will. As Quran is revealed in Arabic language and everyone is not able to understand this language that is why it is translated in so many other languages also for our easiness. So if we want to prevent us from misguidance and misconceptions of Islam then we have to know the meaning of Quran by ourselves not believe in other’s teachings they may misguide us and by only Quran we can understand the true meaning of religion Islam. Allah mentions in Quran about the greatness of this book that it is the only source which brightens our lives. He says in Surah Ibrahim:

“A book that we revealed to you to bring mankind out of darkness into light." [14:1]

Allah also mentions in Quran that we only get benefit out of Quran if while recitation our intentions are to learn something and it is only possible if we read the translation of Quran with concentration in the language which we can easily understand.

"A blessed book, we have revealed to you, for them to reflect on its signs (ayat) and for the possessors of understanding to bear (the reality) in mind." [38:29].

It is concluded that by adopting above mentioned qualities we can include ourselves in the list of Al-Muttaqin and also prevent ourselves from punishment and fear of Allah.