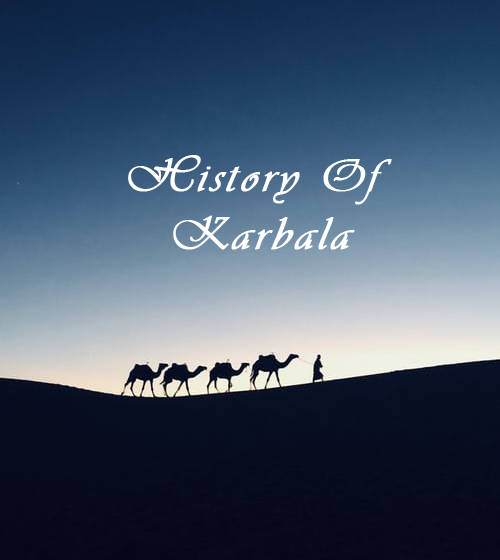 Yazid ibn Muawiya was the second caliph of the Umayyad caliphate who was nominated by his father Muawiya as his successor. Yazid was not the right choice as a caliph and seen as unfavorable by the community as he used to follow the practices which were truly un-Islamic.

When Yazid’s father Muawiya died in 680 CE, he legitimized his rule by putting a demand that Hussain pledge allegiance to him, who was the grandson of Prophet Mohammad (P.B.U.H). However, Hussain (R.A) refused to give allegiance to Yazid. Yazid wanted to assure his kinship, and so he ordered the Governor of Medinah to take the allegiances of Hussain (R.A). Yazid was so much like Pharaoh that he did not want to accept anything against what he said, therefore he also ordered the Governor that if Hussain said no to give allegiances then just kill him.

On the commands of Yazid, Governor called the Hussain (R.A) and told him straight out that he had to pay allegiance to Yazid. On this, Hussain (R.A) replied, “A person like me should not pay allegiance secretly. If you want, you can call all the people, in public, and ask everyone and us with them, to have one voice.” Governor accepted this condition of Imam Hussain (R.A) but his secretary suggested, to imprison Hussain (R.A) until he pays allegiance or to kill him. After hearing this Imam Hussain said, “Whoever among you kills me will be sinful and untruthful”. And, to the governor, he said,

“O governor! We are the People of the Prophet’s House, and we are descendants of the Prophet Mohammad (P.B.U.H). Yazid is a drunkard and habitual to bad deeds, who kills and do injustice to people without reason, and a person like me does not pay allegiance to a person like him. However, let us meet in the morning and let us see that who is most eligible for leadership.”

After this whole scenario, Imam Hussain (R.A) decided to travel towards Kufa (city in Iraq) but to never give allegiances to Yazid. The people of Kufa had strong opposition of the Syria-based Umayyad rule and had a long-standing devotion to the house of Ali (R.A) who was the father of Hussain (R.A). Hussain (R.A) traveled towards Kufa with a group of retinue comprised of 70 men, his caravan was intercepted by a 1,000 strong army of the caliph at some distance from Kufa and pushed north. He was forced to pitch tents in the plain of Karbala on 2 October, where a larger army of 4,000 arrived soon afterwards. Negotiation failed after the Umayyad governor Ubaid Allah ibn Ziyad refused to let Hussain go without submitting to the authority, a condition declined by Hussain (R.A). Battle of Karbala ensued on 10 October in which Hussain was killed along with most of his relatives and companions, while his family was taken in prison. The battle was followed by the Second Islamic Civil War, during which the Iraqis organized two separate campaigns to avenge the death of Hussain (R.A); the first one by the Penitents and the other one by Mukhtar al-Thaqafi and his supporters.

The Battle of Karbala has the central place in Shia literature. For the Shia, suffering and death of Hussain (R.A) became a symbol of sacrifice in the struggle for right against wrong, and for justice and truth against injustice. The battle is commemorated during the 10th of Muharram, annually by Shia. The 10th day of the month-Muharram is known as the Day of Ashura. During this period, Shia community mourns, hold public processions, organize religious gathering, and beat their chests. Sunni Muslims consider the incident of Karbala as a historical tragedy. Hussain (R.A) and his companions are widely viewed as martyrs by both Sunni and Shia communities.