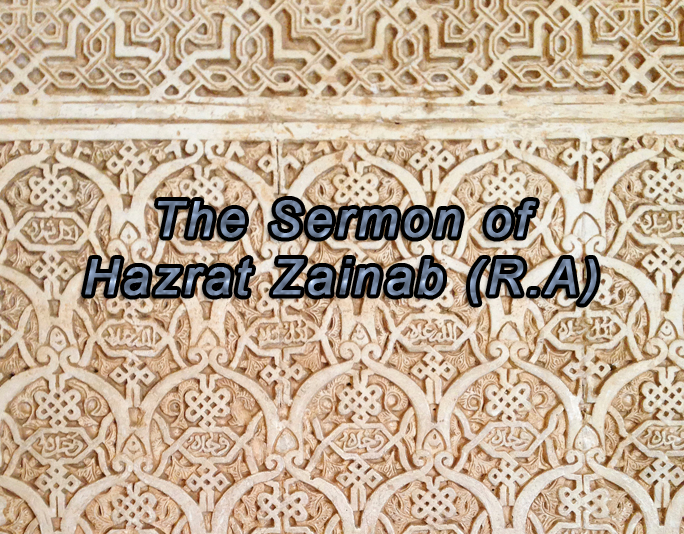 The Sermon of Hazrat Zainab (R.A)

Hazarat Zainab (R.A) is the daughter of Hazrat Ali (R.A) and Hazrat Fatima (R.A), and the granddaughter of Prophet Mohammad (P.B.U.H). Due to her strong faith in Allah and her strong beliefs, she became an important figure of power and sacrifice. Both Sunni and Shia sects have equal respect for Hazrat Zainab (R.A). She is the symbol of power for all the women out there in the world, regardless of any religion. She has shown to the world through her powerful sermon that woman is no less in power and indeed! Allah is with those who put strong faith in Him.

The way she replied to Yazid when he asked indirectly to people that who is objecting? Who is this arrogant woman? And then Hazrat Zainab replied with all the confidence and power which she carries in her personality "Why are you asking them [the woman]? Ask me. I'll tell you [who I am]. I am Muhammad's granddaughter. I am Fatima's daughter." On her voice the whole audience got silence for the moment and amazed by her.

Hazrat Zainab (R.A) then started her sermon with the praise of Allah:

“In the name of Allah, The most Gracious, the most Merciful. All praise is due to Allah, the Lord of the worlds. May praise and salutations be upon my grandfather, the leader of Allah's messengers and upon his progeny”.

O Yazid! Do you think that we have become humble and despicable owing to the martyrdom of our people and our own captivity? Do you think that by killing the godly persons you have become great and respectable and the Almighty looks at you with special grace and kindness? You have, however, forgotten what Allah says: “The disbelievers must not think that our respite is for their good We only give them time to let them increase their sins. For them there will be a humiliating torment”. [3:178]

It will be the day when Allah will deliver the descendants of the Holy Prophet from the state of being scattered and will bring all of them together in Paradise. This is the promise which Allah has made in the Holy Quran. “And never think of those who have been killed in the cause of Allah as dead. Rather, they are alive with their Lord, receiving provision”. [3:169]

In the sermon she referred to all the oppression and injustices of the Ummayad from time of Abu Sufyan till the time of Yazid ibn Muawiyah. She also believed that the Umayyad owed their power to the Islamic Ummah's failure to uphold the Quran and the rightful succession to Muhammad. She further stated that:

“Our blood is dripping from their hands and our flesh is falling down from their mouths”.

Hazrat Zainab (R.A) believed that war against enemies and in the name of Allah has indeed the eternal impacts and the real victory can never be the mistreatment to innocent people but to do jihad against the worst.

At the end she said:

“You (Yazid) may employ your deceit and cunning efforts, but I swear by Allah that the shame and disgrace which you have earned by the treatment meted out to us cannot be eradicated”.