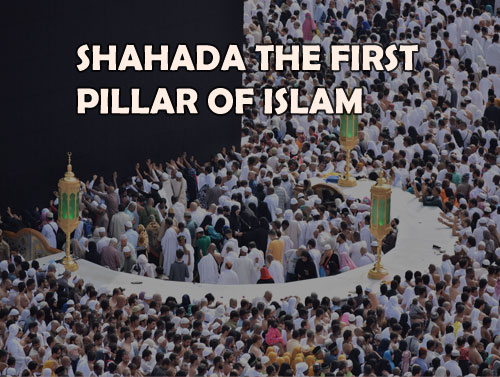 Shahada The First Pillar of Islam

What does a Muslim believe when he says there is no god but Allah?


Shahadah is the first pillar of Islam; it means to testify, to declare, or to bear witness that there is no god but Allah and Prophet Mohammad (P.B.U.H) is the last messenger of Allah. The first component of shahadah is the fundamental principle of Islam, foundation of religion, and the building of Islam. It is to believe He is our Creator, Sustainer, and the Guardian of universe. Moreover, He is one alone eternal Entity and His existence is so high and sublime that is beyond our imaginations. Giving life and death is in His hands, Quran Says "Who provides for you from the heaven and the earth? Or who controls hearing and sight and who brings the living out of the dead and brings the dead out of the living and who arranges (every) matter?" They will say, “Allah," so say, "Then will you not fear Him?" [10:31]

The above verse of Surah Yunus teaches us that He is the supreme Creator.

He is one in his existence and Quran bear the witness of His oneness in the following verse:

The peaceful and the perfect system of the universe teach that He is one alone and the master of this universe. We all are His servants and a part of His kingdom Who Created this great universe without any flaws.

Surah Ikhlas explains the nature of shahdah. QURAN SAYS in this chapter:

“Say He is one alone eternal and absolute, He begots not nor He is begottan and to Him none could be co-equal." [112:3-4]

Qualities and Attributes Of Allah

“Allah - there is no deity except Him, the Ever-Living, the Sustainer of [all] existence. Neither drowsiness overtakes Him nor sleep. To Him belongs whatever is in the heavens and whatever is on the earth. Who is it that can intercede with Him except by His permission? He knows what is (presently) before them and what will be after them, and they encompass not a thing of His knowledge except for what He wills. His Kursi extends over the heavens and the earth, and their preservation tires Him not. And He is the Most High, the Most Great”. [2:255]

Allah Is the One Who Provide Us With sustenance

“(He) who made for you the earth a bed (spread out) and the sky a ceiling and sent down from the sky, rain and brought forth thereby fruits as provision for you. So do not attribute to Allah equals while you know (that there is nothing similar to Him)”. [2:22]

This verse explains that He has taken the responsibility to provide His creation with RIZQ so we are supposed to worship Him alone because He provides us with food and fruits to develop good health. He is the one Who has put us alive and Who has shown us the means to survive. In another place Quran also says,

“We also sent down blessed water from the heaven, wherewith We caused gardens and harvest-grain to grow , and tall palm-trees with their thickly-clustered spathes; all this as sustenance for Our servants. And thus We do bring the dead land back to life with water. Such shall be the coming forth (of human beings from the earth)”. [50: 9-11]

Why shirk is considered as the greatest sin of all sins?

Shirk is an Arabic word, it suggests partnership or partner according to Islamic sharia. It means to associate any partner or anything with Allah. The holy Quran says,

“Surely Allah does not forgive that anything should be associated with him, and forgives what is besides that to whomsoever He pleases, and whoever associates anything with Allah, he devises indeed a great sin.” [4:48]. It means that whoever will die as polytheist will be directly thrown into the fire of hell. Also the Holy Quran states in Surah Luqman:

“Do not associate aught with Allah; most surely polytheism is a grievous inequity.” [31:13].

The first kind of shirk is shirk in oneness it means to associate anything or anyone with Allah. Allah does not forgive if a person associates anything with Him. Quran says in Surah Maidah,

“They have certainly disbelieved who say, “Allah is the third of three." And there is no god except one God. And if they do not desist from what they are saying, there will surely afflict the disbelievers among them a painful punishment”. [5:73]

The above verse teaches us that Allah is not one third of the god but He is the one and the only God.

The second kind of shirk is shirk in existence it means that a person believe that Allah has family, siblings, and children. Surah Ikhlas explains that Allah is one and He is free from all relationships.

The third kind of shirk is shirk in worship it means to worship someone else besides Allah. Quran says in Surah Adh-Dhariyat,

“And I did not create the jinn and mankind except to worship Me. I do not want from them any provision, nor do I want them to feed Me. Indeed, it is Allah who is the (continual) Provider, the firm possessor of strength” [51: 56-58]

The above verse teaches us that our purpose of creation is only that we should worship Allah and only Allah is worthy to be worshipped, indeed.

If anyone will commits the above mentioned kinds of shirk then he or she would definitely be punished in to the fire of hell because this sin is called as ‘GUNAH-E-KABEERAH’ which means a major sin, and it will never ever be forgiven by Allah. The holy prophet (P.B.U.H) said “Shirk is greatest of all sins”