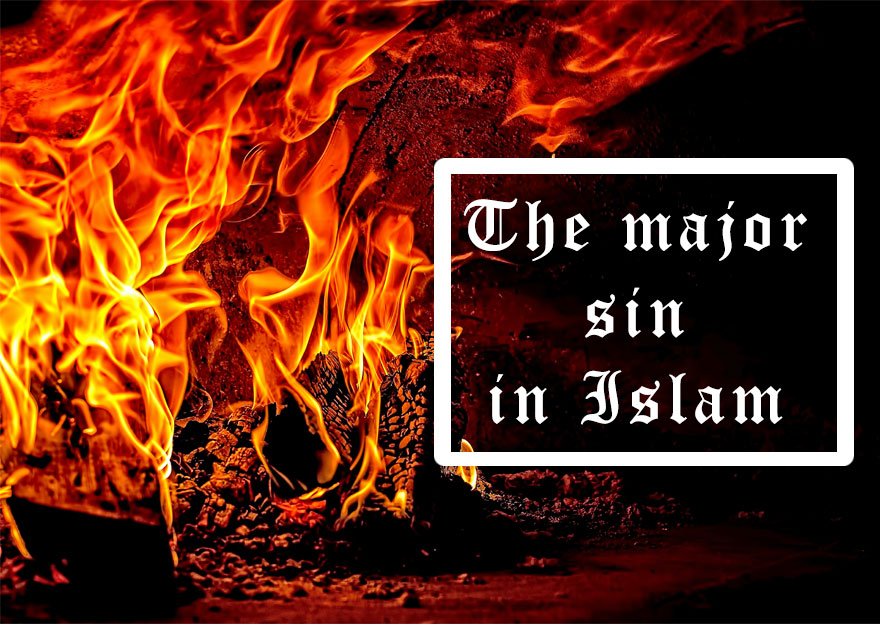 The major sin in Islam

What does Shirk means?

The word shirk in Islam is used to refer to the worship of idols or the worship of many, which means the worship, or worship of gods, gods, or anything other than Allah. Contrary to polytheism, Islam is a strong teaching of the one God nailed to the tawḥīd (unity of God), that is, one God, distinct, and perfect.

There are two types of shirk major or minor shirk.

Association of Allah Almighty with anyone is a major shirk, and it is also called as shirk qabira. Shirk is anti-religious. Just as daylight and night darkness cannot meet, similarly, shirk and faith has never met under the umbrella of Islam. All the esteemed Prophets of Allah have renounced shirk.

As Allah Almighty says in the Holy Quran:

Verily! Allah will not pardon those who associate a partner with Him. Apart from him, He will pardon all others. Who ascribe partners to Allah has gone far astray. (Surah No. 4, An Nisa, Ayat No. 116)

At another place He (Allah) says in the Holy Quran:

Those who associate partners with Allah, when they will see their "partners" they will say: "Our Lord! These are `partners' whom we used to call besides You." But they (the partners) will throw back their word at them (and say): "Indeed you are liars!" (Surah No. 16, Al Nahl, Ayat No. 86)

All following forms of shirk are minor shirk (shirk saghira) compared to polytheism. Allah Almighty will forgive minor shirk, but He will not forgive the sin of associating Him with anyone.

Shirk of worship is manifested in belief in the power of creation – e,g, reverence for saints, kissing of sacred stones, and praying in the tomb of a holy person.

Shirk of custom is also called shirk al- adah, which includes all superstitions, such as superstition and the search for divination.

There is shirk of knowledge informing anyone, such as astrologers or dream interpreters, about the knowledge of the future.

Shirk is a Sin

The Qur'an views shirk as an unforgivable sin if one dies without repenting of it. The punishment of polytheism (shirk) is described as follows in the Quran:

"Those who reject (the Truth), among the people the Book and the Polytheists, will be in Gehenna-fire, to dwell in it (for their sake). They are the worst of creatures." (Al-Bayyina, 98/6 ).

At another place Allah Almighty says in Holy Quran:

Since shirk is one of the major sins we all Muslims should avoid in order to be in the boundaries of Emaan. A person who performs shirk is the one who crosses the boundary of Deen (Religion). There is only one creator and all humanity should have the firm believe in the oneness of Creator.

Rational of only one God in the Universe

If there were two gods then the system of this universe would be disturbed. For example, there must have been a conflict between two gods that when morning should happen and how long night should be, when sun should rise and when sun should set, how many oceans there should be and how high mountains should be, how many births could happen in a year and how many deaths are important to let the world balance, etc. There are no such things happening and world is running in a calm and perfectly fixed process for past many years. These are few logical reasons that there is only one God who is running the universe.

Thus, that one entity is running the entire universe and we all creatures should need to believe in the oneness of that God and we should avoid shirk.