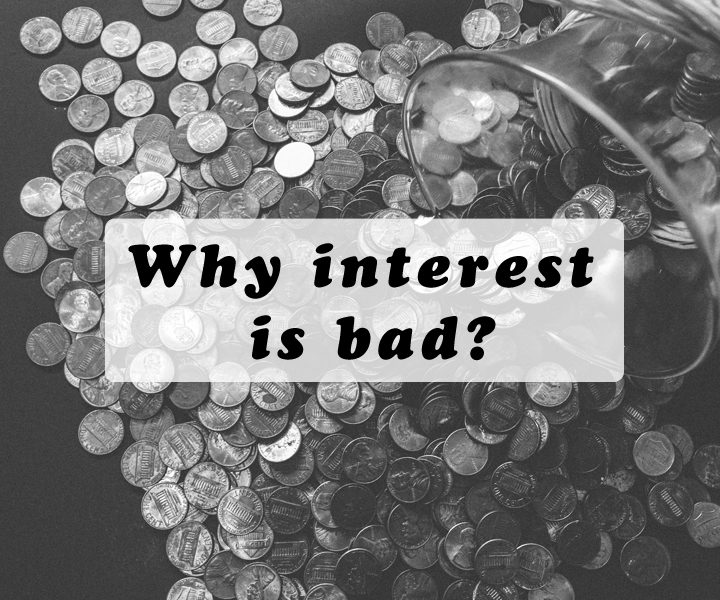 Why interest is bad

"Why is Islam prohibiting interest?”

At some point in life, this is a question we've all been questioned or asked.

What is the main argument against interest?

By operation of law the argument toward interest is that this is exploitable. A rich person is someone who has a great deal of money and he can lend. A poor person has very little income, and he needs to borrow money. If he ends up taking out an interest-bearing loan, the transfer budget would be from the poor to the rich that further on all a really hardline evaluation is unintuitive and exploitative.

As Allah has mentioned the similar thing in Surah An-Nisa, verse 161:

“And [for] their taking of usury while they had been forbidden from it, and their consuming of the people's wealth unjustly. And we have prepared for the disbelievers among them a painful punishment” [4:161]

The counter argument on the above argument is

Another argument that seeks to cut off all other counterattacks is: "Money is merely a medium of trade, and therefore Islam does not accept 'leasing' to something that contains no value in itself (and is not a purpose of the transaction)." The argument that is raised here is clearly that we never go to a store to buy £ 5 note for use as kitchen supplies, or to be used as a grocery.

Interest is the most challenging topic

Interest is by far the most difficult of all of the other things which observant Muslims prefer to avoid. Without is it seems difficult to get by in the world of today. How are you funding your education, buying a home, starting a business or getting out of a mess when you can't get the money with interest? What does it mean about Islam? Is interest negative for everything? What interest concerns?

The first question is what Interest actually is?

Interest is the extra sum the consumer pays back to the lender from what he was lent originally. For instance, if you lend $1000 once per year at 5 per cent rate per year, you would just owe next year $1050. The extra $50 will be interest. Its principal seems to be the original $1000.

Quran has clearly prohibited the interest, as Allah has mentioned in the Quran in Surah Al-Baqarah, verse 276:

“Allah destroys interest and gives increase for charities. And Allah does not like every sinning disbeliever [2:276]”.

Prohibition of Interest in other books

In Judaism and Christianity books interest is also forbidden. In Exodus, the second book of Torah as well as the Old Testament, it goes on to say: "If thou make loans with thee to any of My friends, except to the needy, thou shalt not be to him as lender; nor shalt thou lay interest upon him" [22:24 (25)].

Why? What makes the interest so bad and why it is strictly prohibited?

The most widely cited justification for the interest ban is that it's unfair and oppressive. It is the wealthy one who has to lend money. Standing able to charge profit on such loans immediately enables them to get wealthier on the foot of those in need of money.

What Plato and Aristotle say about Interest?

Plato denounced all who demand interest on the loans for "harvesting their own stings on every fresh applicant who gives them an opportunity to inject their money's toxin; and thus multiplying their wealth through usury.

Aristotle contributed to the claims of his instructor, saying charge interest was abnormal. He argued the economy’s aim was to meet basic needs, such as food, shelter, and clothes. Development of products to meet these conditions, such as manufacturing and agriculture, has been a "normal" way of making money.

Interest is bad for humanity and society

But the problems are not either personal or theoretical. Looking at the history of interest-based borrowing, we see that the issues that it has brought about in society have indeed been pervasive and significant.