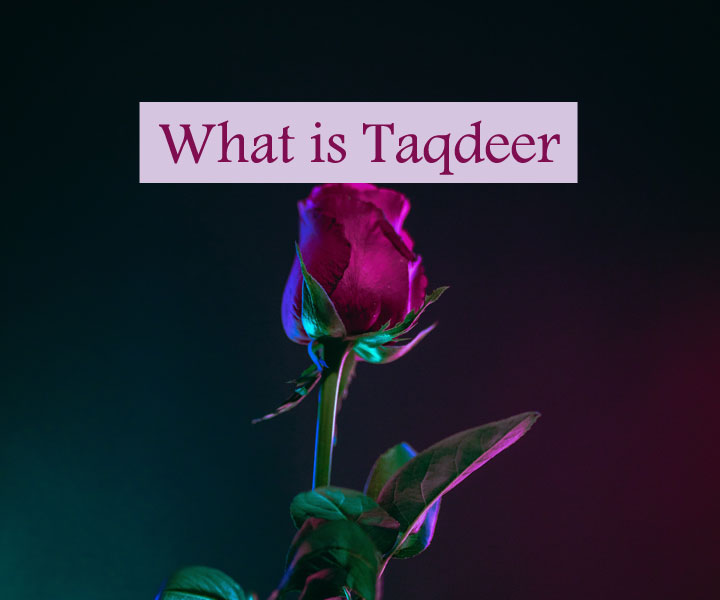 An Arabic term that corresponds to predestination is taqdeer (also spelled taqdir). Although the word has deep origins in pre-Islamic conceptions of blind fate, it applies to the declaration of God of the destiny of all creatures before they were created.

The Cirebonese like many other Muslims, think of human fate, good or evil, beneficial or unfavorable, as decided ultimately by God. Both Qadla and Qadar are attributed to in more common terms by a single word, Takdir, implying Divine decision or predestination.

A principal article of the Islamic religion is the faith in Taqdeer. It is often misinterpreted idea that gives rise to many unaddressed issues, such as:

If fate has indeed affirmed a person's final abode, what else are his actions or his pleas to Allah for use?

Many narratives respond to such deeds as a motive of income gains, lifespan as well as a means of calamity prevention. For instance, Thawban May Allah be pleased with him, reporting that the Messenger of Allah (P.B.U.H), "Truly a man is deprived of a provision (which was written for him) because of a sin he commits; only supplication changes destiny; and only justice can increase the life span." (Nasai, Ibn Majah)

The aim of the beginning of mankind is to praise Allah the Almighty and to prove submission to Him. In the Holy Quran, Allah says in Surah Adh-Dhariyat:

Second, this life acts as a measure of our loyalty to our maker, so that he would benefit us favorably in the next life. In the Holy Qur'an, Allah says in Surah Al-Insan:

“Indeed, We created man from a sperm-drop mixture that We may try him; and We made him hearing and seeing. Indeed, We guided him to the way, be he grateful or be he ungrateful”. [76: 23]

Thirdly, the ideas that even this world is a test warrants where free will is possessed by the subjects getting evaluated and if such a measure would have no meaning otherwise.

With all the above in view the meaning of fate will further be clarified by realizing destiny to be Allah 's knowledge as to how the person is going to use his free-will rather than a pre-decided element being imposed upon him without offering him a reasonable chance.

To sum up, every person has been offered unlimited will and should use it to work to achieve Allah's pleasure and also that Allah has complete awareness of the acts of the person; past, present as well as future.

With consideration to the misconception, given fate being pre-ordained, the likelihood of rising one's income, lifespan and aversion to disasters. As Allah says in Quran, in Surah Ar-Ra’d, verse 39:

“Allah eliminates what He wills or confirms, and with Him is the Mother of the Book”. [13: 39]

Scholars conclude from the above verse, that there are two main types of destiny:

This fate is recorded on 'The Preserved Tablet' (al Lawh al Mahfoodh), and by the commission or omission of such deeds is subject to modification and alteration. For instance: a person's lifetime is typically 50 years, however if he practices the ritual of Hajj, he will rise to 60 years, or some other calamity is to befall him until he averts it by focusing on charity. This is the fate to which the aforementioned narrative refers.

This destiny denotes Allah's everlasting understanding. It covers the final outcome of the fate of Muallaq, i.e. our choices of actions, their ramifications and every specific detail of our existence. This definite awareness of Allah is not even marginally subject to change or alteration, and is unique to Allah alone.

The following can be extracted in light of the above:

Our prayers alter fate and are of great benefit.

Good deeds are really a source of increased sustenance and calamity prevention.

Sins contribute to a reduction in sustenance and trigger calamities.

What Hadith says about Taqdeer?

“Ali narrated that one day the Messenger of Allah was sitting with a wooden stick in his hand with which he was scratching the ground. He raised his head and said, “There is none of you, but has his place assigned either in the Fire or in Paradise.” They (the Companions) inquired, “O Allah’s Messenger! Why should we carry on doing good deeds, shall we depend (upon Qadar) and give up work?” Muhammad said: “No, carry on doing good deeds, for everyone will find it easy (to do) such deeds that will lead him towards that for which he has been created.” Then he recited the verse: “As for him who gives (in charity) and keeps his duty to Allah and fears Him, and believes in al-Husna, We will make smooth for him the path of Ease (goodness) (Surah al-Lail 92:5-7)”. [Sahih Muslim]