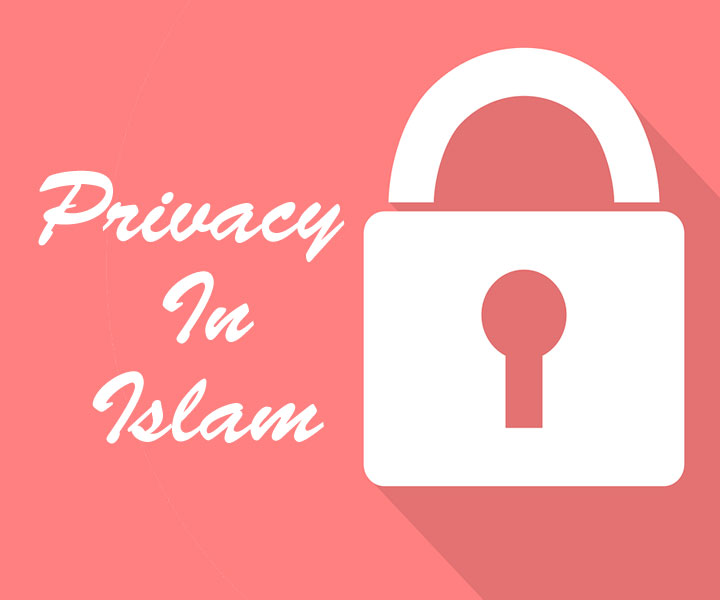 In this advanced era of social media, privacy sounds to be a major concern as nobody pays regard to it. Indeed it is a fact that we are more globalized now as compared to past but still privacy is the basic ethic of life which needs to be followed.

People are suspicious to know about your life affairs and they would not even think for a second before asking. They can easily ask about your marital status or the number of kids you have. God forbid, if you do not have kids then they would love to know the reason to make it a hot topic in Public. There is basic code of conduct which should be followed and even Islam also shares principles that pay importance to privacy.

Allah has explained this in Surah Al-Hujurat, verse 12:

“(O you who believe! Avoid suspicion as much (as possible): for suspicion in some cases is a sin. And do not spy on one another (to find out faults of others), nor backbite one another. Would any of you like to eat the flesh of his dead brother? You would abhor it. So remain mindful of Allah. Allah is Most Relenting, Most Merciful)” [49: 12].

Islam not only forbids people from accessing others' properties without permission, instead it provides safeguards for members of one's own family from hidden intrusion through their privacy. Individual is not even permitted to enter one's house in secrecy. In Muslim state we now tend to decorum standards within such a family circle.

This has been clarified by Almighty Allah in Surah An-Nur, verse 27:

“O you who have believed, do not enter houses other than your own houses until you ascertain welcome and greet their inhabitants. That is best for you; perhaps you will be reminded” [24: 27].

The Prophet has gone so far as to warn his followers not to unexpectedly or surreptitiously enter a man's house except his own permission.

Abu Saeed Khudri recounted that Abu Musa requested permission to enter on 'Umar three times, and he did not grant him permission, so he left.' Umar sent word to him saying:

“I asked permission to enter three times, as the Messenger of Allah enjoined upon us, then if we are given permission we should enter, otherwise we should go back.”

“You should bring me proof of that, or else!”

Then he came to a gathering of his people and asked them to swear by Allah concerning that, and they did so, so he let him go.” [Ibn Majah]

Revealing secrets doesn't mean people are seeking to defame others and reveal their private affairs and misuse or breach their privacy. The key advantage of disclosing one's secret is the disclosure of the type of affairs information that people avoid disclosing or prefer avoiding them over disclosure or advertising them.

One of several attributes of God is His "sin-covering," as well as the Creator includes the terrible crimes and misconducts of people, and He knows the covering up of the flaws of individuals as an accountability of all people, and He absolutely adores fault-covering people.

The 'right of fault covering' in Islamic guidelines is one of the Muslim's rights to one another and Muslims are compelled to uphold this right. Under this basis, a Muslim has the duty to cover up and hide the flaws of others, and to avoid exposing and publicizing them, which causes shame or jeopardize the public chastity of Muslims.

In what private way Muslims are allowed to point out flaws in another Muslim?

In a disguised way, Muslims are encouraged to make others aware of their faults and to warn them not to do these unethical or wrong deeds in order to fulfill their duty to promote good deeds and also not to do unlawful deeds.

The key explanation for Islam's sensitivity about the growth of prostitution and the disclosing of the affairs of others, in addition to the moral need and legal duty to deny one 's faults to others and to prevent the disclosing of faults and secrets that their publication is not permitted and deserved, is the negative, social consequences associated with revealing the secrets of people that lead to the expansion of prostitution and social corruption.