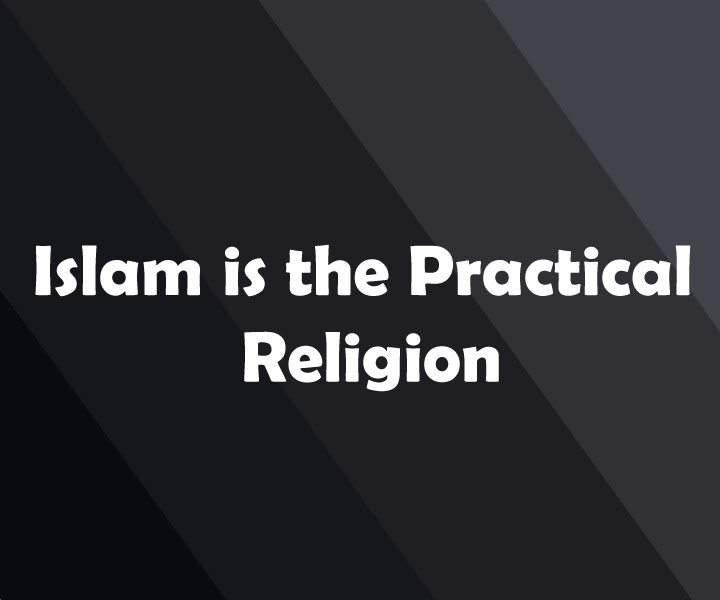 Islam is the Practical Religion

Islam is the religion which is not only limited to beliefs on five pillars until or unless someone starts to practice those in their lives. Those five pillars are; belief in the oneness of God, prayer, Zakat, Fasting, Hajj, four are related to our practical life. Allah’s commands are for the welfare of His creatures then without performing how we can get benefit out of them.

Allah not only revealed His books on us but also sent messengers with them. God witnessed those teachings of Quran in a practical way by His messengers that these will benefit us in our lives in this world as well as hereafter, if we would follow them. Circumstances of world, country, city and even home depend on our action that is why the aim behind Allah’s guidance is to improve our behavior in a better way. Practices those are prior in Islam are:

God has commanded mankind to pray five times in a day; they beg guidance and safety from evil traps from the creator of this world. Salah reminds us the presence of God and realizes that there is someone; who is the lord of worlds, listens our problems and solves troubles and difficulties of life.

Punctuality in prayers not only gives us success in this life but also in the life hereafter. Paradise; the place full of blessings and happiness, has rewarded by God to believers; who fulfilled His commands in this world. Allah says in chapter 23 of Quran:

“Successful are the believers—those who offer their prayers with humility and submissiveness…and those who guard their five compulsory prayers. These are indeed the inheritors who shall inherit Paradise and abide forever therein.” [23:1, 23:9-11]

Our one righteous deed restrains us from rest of the evil acts. God is always ready to help His creatures; all we need is to get courage for at least take one step towards right direction then God ease our reaming path with His blessings and mercy.

It states in Quran of chapter 29 that:

God loves equality among humanity that is why He declared that zakat is mandatory for financially stable people. In this way wealth is evenly distributed throughout human beings and eliminates discrimination between rich and poor, eventually it decreases inequality and injustice in society. Zakat is that particular part in our money which is not belongs to us; it is the right of poor people and if we would not give that right to them, it impure our entire income.

“The alms are only for the poor and the needy, and those who collect them, and those whose hearts are to be reconciled, and to free the captives and the debtors, and for the cause of Allah, and (for) the wayfarers; a duty imposed by Allah. Allah is knower, Wise.” [The Holy Qur’an 9:60]

If giving zakat becomes the habit of everyone, the number of needy people in a society decreases rapidly. Poor people including children, women, aged all spend their whole day on streets and begging for money why? Because of us when they do not get their right which Allah has declared that some part of money of rich people belongs to them, our such sinful actions forced them to beg on streets.

“They ask you about giving: say, “The charity you give shall go to the parents, the relatives, the orphans, the poor, and the traveling alien.” Any good you do, God is fully aware thereof.” [2:215]

Hajj is mandatory on those having money and health, at least once in a life time. Every Muslim wishes to go in the house of God to purify themselves from sins and dirt of soul.

Allah mentions in Quran of Chapter 2:

“And [mention] when We made the House a place of return for the people and [a place of] security. And take, O believers, from the standing place of Abraham a place of prayer. And We charged Abraham and Ishmael, [saying], "Purify My House for those who perform Tawaf and those who are staying [there] for worship and those who bow and prostrate [in prayer]." [2:125]

Best opportunity to beg forgiveness and pray for blessings and guidance is the existence of Muslims in the Holy place in front of Kaaba.

“Then let them end their untidiness and fulfill their vows and perform Tawaf around the ancient House.” [22:29]

For a whole month once in a year every Muslim should fast. Our body and soul both are benefited with fasting. It maintains our dietary habits, develops patience and realizes the worth of blessings of Allah upon us. Allah has prescribed fasting to humanity hence; we can learn piety and righteousness. If someone is used to fast once in a year then he or she can well aware of and better understand the feelings of those poor people who do not have anything to eat for entire year and they are still working with empty bellies. Fasting teaches us to provide meal to hungry people, no doubt Allah’s every command teaches something to those who can understand.

Other than self-benefits Allah also gives us reward for fasting in the life hereafter. It is found in one of Hadiths that our good deeds will remove our previous sins.

It is mentioned in Bukhari that:

Narrated Abu Huraira(r.a): The Messenger of Allah (SAW) said:"... whoever fasts during Ramadan out of sincere faith and hoping to attain Allah's rewards, then all his past sins will be forgiven." [Bukhari]

The basic message behind Allah’s commands is the welfare of society, in the way that every individual can understand the difficult time of one another and realizes the situation of others and wants to overcome the problems of poor people. That is why Islam is practical because the condition of people as well as country is based on our actions and deeds.