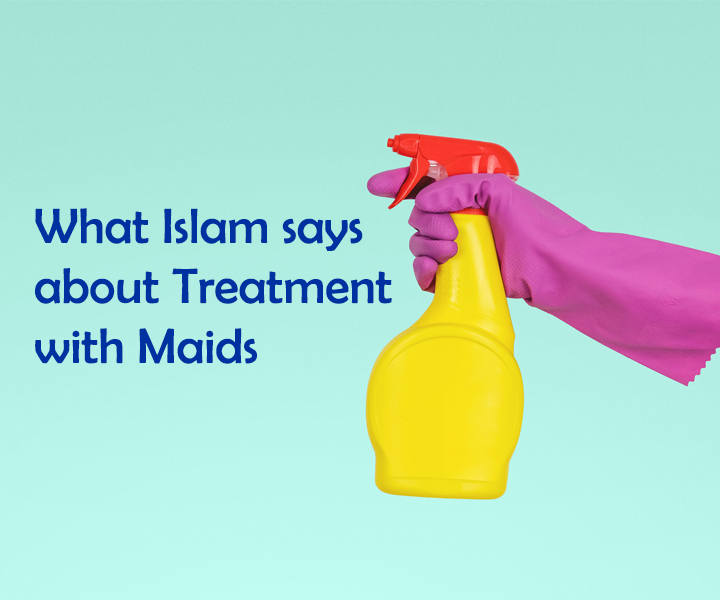 What Islam says about Treatment with Maids

Who are Maids or Servants?

Most people around the world think that their maids are their servants and since they are paying their maids so they can treat them in any way. However, we should not say that maids are our servants because we all are servants of Almighty Allah and whatsoever we are doing in this world with each other is the help and assistance we are offering others. Therefore, maids are the helpers who help people in the home chores and the amount we give them is not our amount, but it is their own amount which they have earned from the hard work.

There are so many people across the globe who are representing such cases where maids are being beaten brutally and maids are being tortured by their bosses. These cases happen at homes or workplaces where heads of the houses or offices think that since they are paying the maids so they can do anything with their maids. However, this is such a worst mentality that heads are paying their maids because in reality these maids are earning in return of their hard work the same way through other people are earning at jobs at offices.

What Islam says about the Treatment towards Maid?

Islam has changed the way maids are treated in the workplace. The goal is to avoid violation of their rights while yet fulfilling our obligations as their employer. Islam is the complete guidance the religion Islam has discussed every code of life and therefore, Islam has also taught the right treatment with maids. As Allah says in Surah Az-Zukhruf verse, 32:

“Is it they who distribute your Lord’s mercy? We ˹alone˺ have distributed their ˹very˺ livelihood among them in this worldly life and raised some of them in rank above others so that some may employ others in service ˹But˺ your Lord’s mercy is far better than whatever ˹wealth˺ they amass” [43:32].

How Prophet Mohammad (P.B.U.H) used to treat his workers and maids?

Prophet Mohammad (P.B.U.H) asked people to be kind with servants as it is mentioned in the following Hadith:

Anas bin Malik had been our Prophet maid for years. In hadith narrated by Bukhari, he said that Rasulullah – peace be upon to Him – always treats him kindly [Sahih-Bukhari].

We should give Wages to Maids and Workers on Time

Workers and maids are working to feed their children and their family, and they wait so much after work for their wages or salaries because this amount could cater their needs up to so much extent. Some of the servants and maids do not feel comfortable to ask for salaries and so it is indeed the responsibility of bosses and heads that they should pay their servants on time. Delaying in wages can cause so many issues to the employees, maids, or servants. Those who can afford and still don’t pay to his workers according to their efforts or work or delay their payments will be questioned on the Day of Judgment.

It is mentioned in the Hadith where Prophet Mohammad (P.B.U.H) says,

“Pay the worker for his work before his sweat dries” [Ibn Maja, Hadith 2443]

All the above verses and hadiths say that maids and servants are not inferior rather they are humans like their bosses and their heads, and it is Allah who is in charge of everything, thus people should not be proud on wealth which is of Allah and not theirs’s.