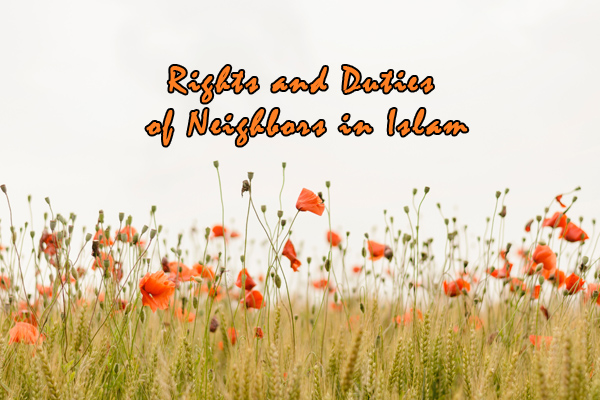 Rights and Duties of Neighbors in Islam

What Quran Says about the Neighbors?

What Hadith says about Neighbors?

Allah’s messenger, Prophet Mohammad (P.B.U.H) says in this regard,

Thus, the good Muslim is one who is best to his companions and neighbors. Prophet Mohammad (P.B.U.H) says,

“The best friend in the sight of Allah is he who is the well-wisher of his companions, and the best neighbor is one who behaves best towards his neighbors”. [Al-Tirmidhi, Number 120]

Prophet Mohammad (P.B.U.H) has further explained the three kinds of neighbors who have rights upon us:

1. First are those who have one right upon us.

2. Second are those who have two rights upon us.

3. Third kinds of neighbors have three rights upon us.

Neighbors, who are Muslim and relative both, possess three rights upon us. Neighbors who are either a non-Muslim or a non-relative possess two rights upon us. Those who are neither a Muslim nor a relative but, they have all the claims of neighborhood possess one right upon us.

These statements show that Islam is the religion of humanity and so it has not declared rights to Muslim neighbors only. Hence, neighbors are of great importance and so they must be respected and taken care as we are told in Islam.

Hazrat Ali (R.A) says about the duties of neighbors, “being a Muslim it is our duty to protect the respect of neighbors when they are absent or not around. When, they are present then it is our duty to respect them, and if they face any sort of injustice then it is our responsibility to help in solving their matters. Furthermore, if we come to know about any fault in our neighbor, then we should try our best to hide those faults from others and if those faults are minor then we must overlook them. On the other hand if we know that our neighbors are doing things which are morally, socially, and religiously wrong, then our loyalty towards them is to desist or stop them by every possible effort. If they have committed a mistake then forgive them and live a happy content life with them”.

“The neighbour is most entitled to the right of pre-emption, and he should wait for its exercise even if he is absent, when the two properties have one road”. [Sunan Abu Dawood, 1557]

Following are the some crucial rights of Muslims:

Neighborhood is the mutual thing in which both parties should take care of each other. To protect the rights of neighbor is important but at the same time it is also one of the major things to be a good neighbor.

Hence, being a good neighbor and take care of your neighbor is one of the highly emphasized things in Islam.