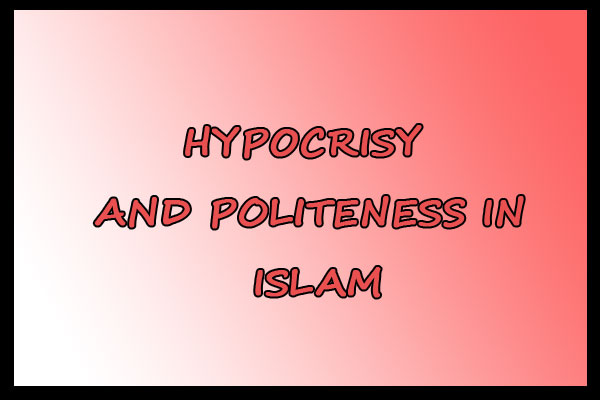 Hypocrisy and Politeness in Islam

Hypocrites continue to deceive as they are familiar with the absolute truth but they believe that it can have a negative impact. People sometimes don't realize they're being two-faced, but they often know exactly what they do. They try to manipulate the facts, hide an inconvenience, and make up for a weak type of reasoning.

They say one thing they do yet another; they make rules, but they do not follow; they live in private in public in one way yet another. They're so deceptive that trained liars might be labeled. Most hypocrites are simply just lying to themselves. You are a hypocrite? People sometimes do not know they are two-faced, but they often know exactly what they are doing. They try to manipulate, hide a misunderstanding, or try to compensate for a weak line of reasoning. In any case, hypocrites know the ultimate truth but they fear it can have detrimental effects— they are manipulative.

Many people often throw off the balance between the sense of hypocrisy politeness, and flattery and the explanation for this is the inability to understand the true meanings of solidarity and true friendship. They don't separate true reality and falsehood, good behavior, and bad in their minds. Therefore, the hypocrite never desires anything positive, instead, he tries to harm people and deceive and gives them misery, and he does so by displaying a good face and attempting to be compassionate and courteous.

“O you who have believed, do not take as intimates those other than yourselves, for they will not spare you [any] ruin. They wish you would have hardship. Hatred has already appeared from their mouths, and what their breasts conceal is greater. We have certainly made clear to you the signs, if you will use reason. Here you are loving them but they are not loving you, while you believe in the Scripture - all of it. And when they meet you, they say, "We believe." But when they are alone, they bite their fingertips at you in rage. Say, "Die in your rage. Indeed, Allah is Knowing of that within the breasts."

A polite person never intends bad for anyone and it is not in his nature to harm anyone or put on an act, instead he will have a friendly, joyful, and kindly face so as to soften the heart of a person who has a negative attitude, or so as to prevent him or others from harming him, without agreeing in any way to his bad decision or supporting him by word or action. Ibn Muflih al-Hanbali (may Allah have mercy on him) says:

It is said to Ibn ‘Aqeel in al-Funoon: I hear the command of Allah (S.W.T): “Repel (the evil) with one which is better (i.e. Allah orders the faithful believers to be patient at the time of anger, and to excuse those who treat them badly) then verily he, between whom and you there was enmity, (will become) as though he was a close friend” [Fussilat 41:34], but I hear people regard those who show something other than what they feel like hypocrites. How can I obey Allah and rid myself of hypocrisy?

Ibn ‘Aqeel said: Hypocrisy means showing a good face whilst concealing bad intentions, and harboring ill will whilst appearing good to cause harm. What the verse refers to is showing a good attitude in response to a bad one for the purpose of changing it to a good one.

From this, it may be understood that hypocrisy means concealing ill will whilst making a show of goodwill to cause harm and evil. The one who shows a good attitude in response to bad treatment to remove evil is not a hypocrite, rather he is trying to put things right. Have you not heard the words of Allah “then verily he, between whom and you there was enmity, (will become) as though he was a close friend”? This is done to soften hearts, ward off enmity, extinguish the flames of hatred, create love and correct beliefs. This is how one makes friends and wins hearts.

Al-Bukhari includes a chapter in his Saheeh entitled: "Chapter on politeness with people " in which he says:

It is narrated from Abu’l-Darda’: We smile at people when our hearts are cursing them. He also includes another hadeeth (may Allah be pleased with her) concerning this topic: A man asks permission to enter upon the Prophet (P.B.U.H) and he says: “Let him in, what a bad son – or brother – of the clan he is.” When he enters he speaks kindly to him. I say to him: O Messenger of Allah, you say what you say then you speak kindly to him? He says: “O Aisha, the worst of people in status before Allah is the one whom people leave alone for fear of his foul mouth.”

A hypocrite matches a chameleon; because he switches his color according to the place he is at that time.

Abu Huraira has reported: The Messenger of Allah (P.B.U.H), says,“Two qualities are not combined in the hypocrite: good behavior and understanding of religion.” (Al-Tirmidhī 2684)

The Quranic verses that mention hypocrites caused so many hypocrites to be sincere Muslims. For example, let us see this verse which has impacted many:

“Among the believers are men (of highest valor) who have been true to their covenant with God: among them are those who have fulfilled their vow (by remaining steadfast until death), and those who are awaiting (its fulfillment). They have never altered in any way. In consequence, God rewards the truthful ones for having been true to their covenant, and punish the hypocrites if He wills or turn to them in lenience and accept their repentance (if they repent). Surely God is All-Forgiving, All-Compassionate. “[Al-Ahzab Surah, 33:23-24]

Politeness towards others is considerate and polite. Because politeness is not just an expression of respect and consideration, it is the behavior that defines social politeness. The way a person handles himself is behavior and the manner an individual performs himself conducts. One behavior that is not considerate or valued by others is that of the variance of polite behavior, recurring offenses without apologizing, that demonstrates aggression and forms the foundation for sociopathic and psychopathic personal behavior. Being a Muslim our ideal is Prophet Muhammad (P.B.U.H) as he is a man of incomparable demeanour and Allah (S.W.T) has guided us through his Holy Book i.e. Quran. If we make Sunnah and the teachings of Quran the foundation of our daily life we will unequivocally be on top of the heap.