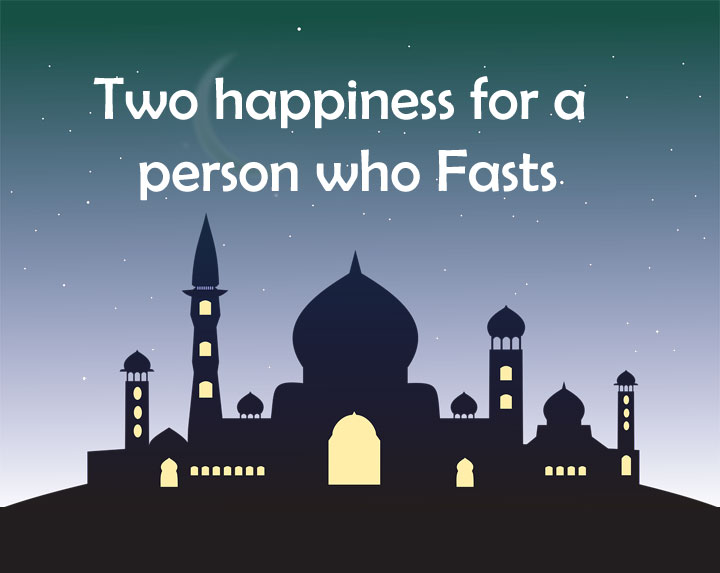 Two Happiness for a person who Fasts

The Holy Prophet (PBUH) points out the major and minor aims of fasting in the month of Ramadan. The fulfilment of theses objectives is the perfect way to prepare you for fasting. The minor goal is to seek happiness in each day of entire month of Ramadan at the time of iftar; an evening meal when sun sets and Muslims end their fast. The second and key aim is to achieve happiness at the completion of the journey of life, when you meets God.

An individual who does evil acts during fasting would be less likely to be satisfied and happy at the end of the fast as well as at the end of the worldly life. This is typically the case for those who suppose fasting as more of a physical practice than a spiritual one.

Our last prophet Muhammad (PBUH) makes it very clear that in Ramadan fasting should never be regarded exclusively as a dietary process.

“If one does not leave off false action and speech, then there is not a need for Allah for one to leave off his food and drink.”

There are several factors of pleasure at the end of the fast for believers. Some of them are:

Source of Satisfaction due to the Fulfilment of God's Command

A sense of achievement causes the feeling of pleasure like fasting in Ramadan is the command of God for His believers, hence; when someone fulfils it, then he becomes satisfied and happy because then it is obvious that he archives something good for the life hereafter and it also includes in the worship of God also.

It is mentioned in Qur’an that God gives you great favour in return of your good deeds and religious fulfilments.

“And whatever you have of favour, it is from Allah.”

Happiness for getting its Rewards

Ramadan is the month of blessings and fasting is the form of worship and it emerges with the great number of rewards. This is in itself a great cause of joy for a person who Fast and keep himself away from all sinful deeds. Allah acknowledges the importance and status of reward of fasting in Hadith as:

“Every action of the son of Adam is for himself except fasting. Surely, it is for Me and I will give reward due to it.”

Happiness due to the Betterment of Soul and Health

Generally, a person’s good health leads to his happiness. Fasting for a entire month not only enhances the strength and power of body but also increases the resistance towards soul against evil traps.

Happiness for the Time at which Wishes are Answered

At the moment, when sun sets and everyone who Fast for the whole day gets the permission from God to break his fast, is the time when wishes of those believers are answered. This is the great opportunity for mankind, begging all of their desires related to this world and hereafter to God.