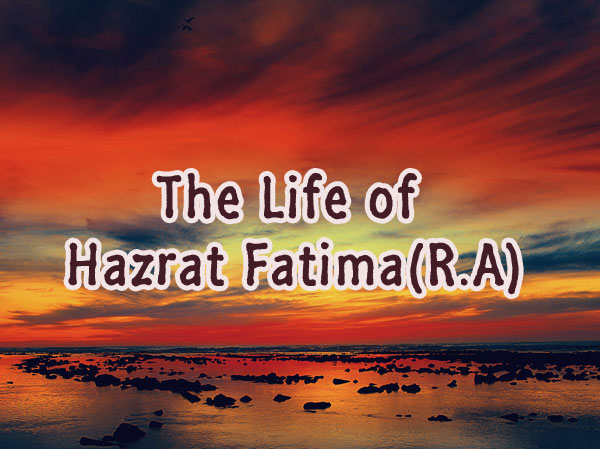 The Life of Hazrat Fatima(R.A)

Hazrat Fatima (R.A) is the youngest and dearest daughter of Prophet Mohammad (P.B.U.H). She is the great example for all Muslim women in the world and she will remain as the person who gives perfect guidance to live a better life. Muslim women should need to study her life that how she has spent her life and then Muslim women should follow her. Prophet Mohammad (P.B.U.H) has counted Hazrat Fatima (R.A) among best women in the work, he says,

“The best of the women of paradise are Khadeejah bint Khuwaylid, Fatima bint Muhammad, Aasiyah bint Mazaahim the wife of Pharaoh, and Maryam bint ‘Imraan.” [Ahmad]

Hazrat Fatima is always taken as the different woman from all other women in the world. She resembles with her father Prophet Mohammad (P.B.U.H) a lot in her virtues and high qualities. She is the noble lady and an example of perfection. Her faith is so strong that she has maintained a representation of woman’s character which Allah likes. Prophet Mohammad (P.B.U.H) says,

Allah intends only to remove from you the impurity [of sin], O people of the [Prophet's] household, and to purify you with [extensive] purification. [33.33]

“The Prophet (PBUH) used to pray at the Ka’bah, and Abu Jahl and his companions were sitting there. They said to one another, ‘Who will bring the intestines of the camel of so and so and put it on Muhammad’s back when he prostrates?’ So the most wretched of people went and brought it and waited until the Prophet (PBUH) prostrated, then he put it on his back, between his shoulders. I was watching but I could not help him because I did not have any power. They started laughing and leaning against one another (because of their laughter), and the Messenger of Allah (PBUH) was prostrating and did not raise his head until Fatimah (PBUH) came and removed it from his back. Then the Messenger of Allah (PBUH) raised his head, and said, ‘O Allah, deal with Quraysh,’ three times. They became worried when he prayed against them, because they used to believe that du’aa’s made in that land would be answered…” [Bukhari and Muslim]

The great degree of affection of Muhammad (PBUH) for her daughter can be seen from the fact that whenever Fatima (R.A) would enter the room, if He (PBUH) was sitting, He would get up for her and kiss her on her forehead. Also if the Prophet (PBUH) was traveling and entered alMadina, the first thing he would do while entering the city is to go into the Masjid, pray 2 rakats and then to visit Fatima (R.A). And if he was leaving Madina the last thing he would do before leaving is to go and see her. This shows the special status of Bibi Fatima (R.A) near Muhammad (PBUH).

“And He it is Who has created man from the water, then He has made for him blood relationship and marriage relationship, and your Lord is powerful.” [25:54]