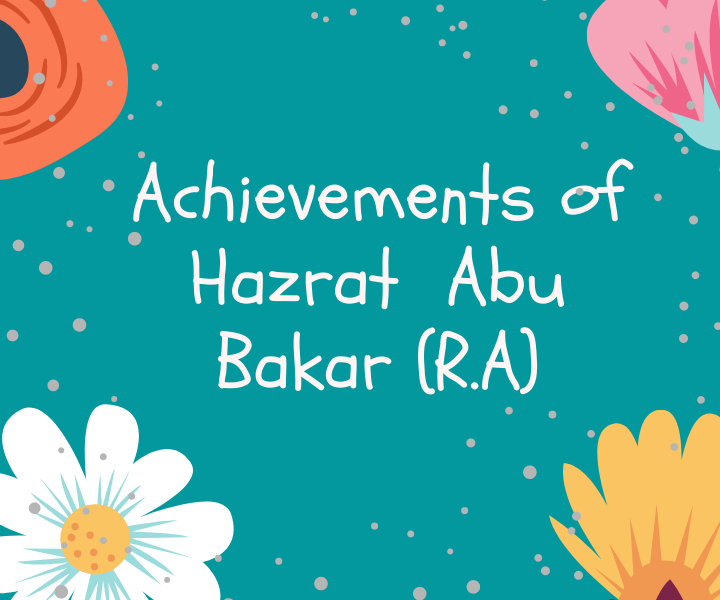 Compilation of the Holy Quran

One of the greatest services rendered to Islam by Hazrat Abu Bakr (R.A) is the collection of Holy Quran. A large number of Hafiz, companions has been martyred in various battles which took place against rebels and false prophet. On the suggestion of Hazrat Umar, Hazrat Abu Bakr has ordered for the compilation of the Quran and appointed Hazrat Zaid bin Thabit for this work. He adopted the same order of the various chapters of the Holy book as revealed to the Holy Prophet (P.B.U.H).

In the compilation of the Holy book, a number of prominent companions assisted Hazrat Abu Bakar (R.A). The compiled copy of the Quran has been kept in the house of UMMUL-MUMININ, Hazrat Hafsa (R.A). It was proclaimed that anyone, who desired, might make a copy of it or compare it the copy one already possessed.

The rebellions started with the refusal of the tribes to deposit Zakat fund in the Baitul –mal, as was done during the days of the Holy Prophet (P.B.U.H). Hazrat Abu Bakr called a meeting of his Shura (advisory council) and sought its advice. Most of the companions did not consider it advisable to take action at that time because of the wars against false prophets and major revolts. But Hazrat Abu Bakr was firm on taking strong and prompt action against them.

Hazrat Abu Bakar (R.A) has declared, ‘’I swear by Allah, I will fight alone, if others do not support me, against everybody whosoever refuses a single she goat-kid due on him in Zakat’’ (AL-BIDAYA WAN-NIHAYA).

He launched a fierce campaign without delay. His instructions were to call rebels to Islam first, and if they failed, to fight them. Some of the rebel tribes submitted to Islam without even fighting. Wars were waged against those who remained adamant.

The Arabian Peninsula was surrounded by the two great empires of that time. On its north-eastern side was the border of the Persian Empire. At that time Iraq was under the control of the Persian Empire. The northern part was bordered by Byzantine Empire. It consisted of Syria, Palestine and Egypt. Hazrat Abu Bakar (R.A) has conquered these big regions.

Hafir was the where the first battle between Muslim and Persian took place. Persians were under the command of Hurmuz, A famous Persian general. Hazrat Khalid bin Walid voice commanding the Muslims army. Persians were defeated and routed. In order not to run from the battlefield the Persian soldiers had tied themselves to one another with chains. Due to this, the battle is known as the battle of chains. After the battle of chains, Hazrat Khalid conquered Hira,Dumatal-Jandal And finally and the conquest of Firad, The whole of South and most of north Iraq were conquered.

Hazrat Abu Baker found that the Romans had begun to conspire against the Muslims. Furthermore, to take strong action against Romans was also necessary, keeping in view the Arab trade with Syria as the border clashes made the trade routes dangerous.

So, in the year 13 AH, he raised a big army comprising 27,000 men and divided it into four battalions. When Hercules heard about the Islamic armies, he also sent four armies to face them. Each of these armies votes several times more than the total Muslim army. However, Muslims defeated them and captured many cities including Busra, a city in Syria. After a fierce battle, Muslims defeated Romans in Ajandayn which was a great shock to Byzantine after victory, The Muslim army marched forward and laid siege to Damascus.